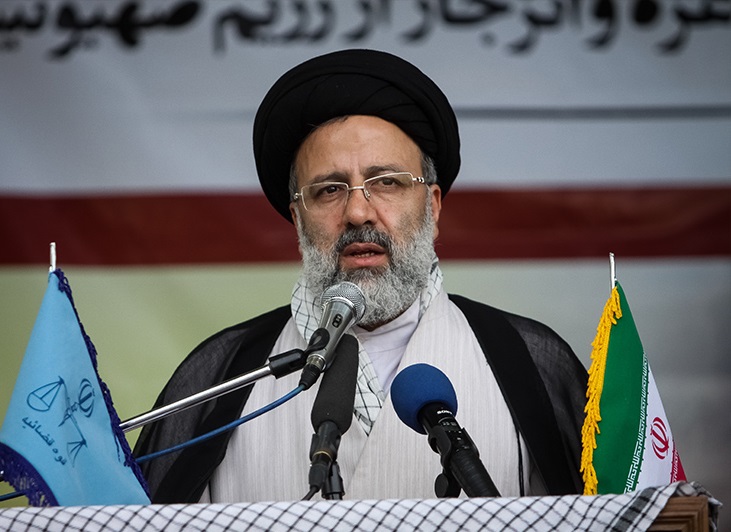 On May 7, 1945, a Nazi radio network broadcast a final encrypted message to its military generals, foreshadowing defeat in World War II. Deciphered by the British, it said: “Closing down forever – all the best – goodbye.” A day later, Germany surrendered, and Victory Day in Europe was declared.

In many ways, this sounds like the desperate message the Iranian regime is sending by planting Ebrahim Raisi as its president. And as mass protests surge in Iran once again, the Iranian people are sending their own message of defiance. Washington should take note and stand on the right side of history.

The regime is at its weak point in its history,as manifested in relentless public upheavals. Over the past two weeks alone, for example, dozens of cities in the southwestern province of Khuzestan rose up in protest to the regime’s corruption and mismanagement. Several young protesters were killed by security forces.

The protests have spread to other cities, including the capital Tehran. The mass rallies came on the heels of an unprecedented strike by workers of the energy sector.

In such turmoil, the presidency of a mass murderer like Raisin sends a message that the regime has every intention to brutally suppress popular demands. But his desperate appointment will actually lead to crippling disturbances for the regime. This was at best a Pyrrhic victory for the regime’s Supreme Leader Ali Khamenei and his protégé, Raisi.

Raisi is known as the “1988 Henchman” by average Iranians. He represents the darkest predilections of the tyrannical regime. As leading human rights groups have noted, Raisi played a central role in the massacre of thousands of political prisoners in Iran in 1988.

During the summer of 1988, some 30,000 political prisoners, mostly supporters of the main resistance movement Mujahedin-e Khalq (MEK), were executed because they refused to denounce their affiliation to the organization.

In 2019, as Judiciary Chief, Raisi also played an instrumental role in suppressing the nationwide uprising against the regime in over 200 cities. Amnesty International has documented at least 7,000 cases of imprisonment and torture by the regime’s suppressive forces. At least 1,500 protesters were also brutally shot down, including teenagers. A new estimate put the number of those killed at as high as 4,500.

The causes of those uprisings, including economic devastation and astronomical state corruption are more aggravated now than in 2019. The regime’s suppressive machinery cannot eternally crush voices that echo legitimate and basic demands, like access to potable water, clean air, and electricity.Small protests will thus evolve into more ferocious uprisings calling for regime change.

But the problem for the regime is that even after the 1988 and 2019 massacres by the likes of Raisi, the opposition has not only not been annihilated, but has actually strengthened. Khamenei received the most serious political blow in decades with the massive nationwide boycott of the regime’s sham presidential elections last month, which was called for and organized by the opposition.

As Maryam Rajavi, the President-elect of the leading democratic opposition National Council of Resistance of Iran (NCRI), noted, “In this boycott, one can hear the footsteps of looming uprisings.”

The Iranian people rejected all factions of the regime in the recent boycott. They are not fooled by the regime’s “reformist vs. hardliner” duet. They seek fundamental democratic change as the foundational means for accommodating their basic demands and freedoms.

A new era has dawned in Iranian politics. By renouncing the ruling criminal enterprise as completely illegitimate, the people will gravitate to a viable alternative to the entire regime. Already young people eager for change are joining the MEK’s Resistance Units inside Iran, which organize acts of defiance and protests across the country.

Raisi is clearly not a sustainable solution for the regime. He is, rather, the personification of its final gasps. So, why would anyone in the international community throw these criminals a lifeline by appeasing or negotiating with them?

The international community, and especially the U.S., should instead stand with the Iranian people, openly condemn the regime as illegitimate, describe Raisi as a mass murderer, and adopt a firm policy vis-a-vis Tehran. An immediate international probe into Raisi’s past crimes should be launched, especially with respect to the 1988 massacre. This is the message that tens of thousands of Iranians and their international supporters sent during the three-day Free Iran World Summit.

With Raisi, the fascist religious tyranny in Iran has sent its final message – “closing down forever, goodbye.” The Iranian people will no doubt celebrate their Victory Day soon – hopefully with the rest of the world cheering them on.

Ali Safavi (@amsafavi) is a member of the Foreign Affairs Committee of the Paris-based National Council of Resistance of Iran (NCRI).