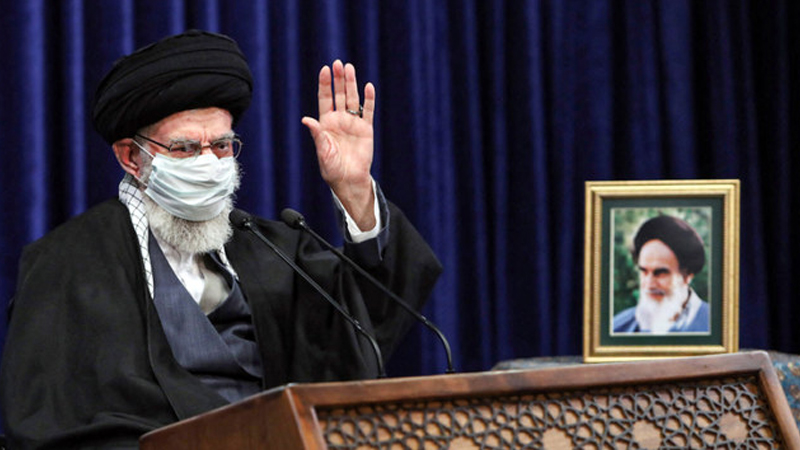 CHIACGO: Leaders of the National Council of Resistance of Iran (NCRI) called on the international community at a press conference on Tuesday to re-enforce sanctions on Iran and not surrender to “Tehran’s blackmailing and posturing.”

NCRI officials revealed new information on how Iran’s Mullahs are carefully building a nuclear weapon while seeking to remove sanctions on its programs.

The latest report by the International Atomic Energy Agency (IAEA) released on Feb. 23 shows anthropogenic uranium particles at two sites in Iran. The Iranian regime had blocked access to these sites to IAEA inspectors for months.

“Today’s revelation shows that deception, denial, and duplicity are part of the regime’s DNA. Neither Europe nor the US should give into Tehran’s blackmail and posturing,” Ali Safavi of the NCRI told the Arab News following the press conference.

“They should hold it to account for the systematic and flagrant breaches of its own commitments, even under the fatally flawed Iran nuclear deal. Sanctions should not be lifted unless and until the regime comes clean on its nuclear deceptions and stops its malign actions in the Middle East and its oppression of the Iranian people.”

Joining the NCRI at the press conference were US envoy and former Under Secretary of State for Arms Control and International Security Robert Joseph and Struan Stevenson, former senior member of the European Parliament from Scotland.

“The discovery of uranium particles at two suspect sites demonstrate very clearly that the regime continues and has continued to violate the agreement,” Joseph said, emphasizing that the Iranian regime cannot be trusted.

“The regime openly violates the limits of the Iran deal today to coerce the US administration back into the agreement. The lesson here is not to be blackmailed by the regime because if you allow yourselves to be blackmailed you will only have more blackmail in the future, and another fatally flawed agreement.”

Joseph said that rejoining the deal will not achieve the goal of President Joe Biden’s administration to lay the groundwork for a broader and more comprehensive agreement with Iran.

Stevenson criticized the EU’s failure to address the problems and urged Biden to halt efforts to renegotiate with Iran.

“Josep Borrell, the EU’s top diplomat, hasn’t uttered a single word of criticism about an Iranian diplomat who was jailed last month for trying to kill hundreds of people in Europe with a bomb,” Stevenson said.

“I sincerely hope that the Biden administration will not follow Borrell’s example of bare-faced appeasement. To do so would, it would be a humiliating defeat to America and a propaganda coup for the theoretical regime. The US, the EU, and the UN must hold the Iranian regime to account for its acts of aggression. Any concessions to the theocratic dictatorship will be seen as an act of weakness by the West.”
The NCRI has been monitoring Iran’s secret nuclear arms development program and said new information released Tuesday was provided by the sources from the People’s Mojahedin Organization of Iran inside the country.

The information includes details on the role and function of the site in Tehran’s nuclear weapons program, the experts involved at the time, and their current activities.

The regime has not yet answered the IAEA’s questions regarding the possible presence of nuclear material at these locations, NCRI officials said.

In his introductory statement to the IAEA Board of Governors yesterday, IAEA Director Rafael Grossi expressed the agency’s deep concerns on finding nuclear material in undeclared locations in Iran.

“The fact is that the mullahs’ regime is seeking to acquire a nuclear weapon as a strategic means to guarantee its survival, and for this reason it has never abandoned its pursuit of a nuclear weapon. This pursuit has continued unabated for the past three decades,” Safavi said.

One site, located north of Abadeh city in the Fars province, was built by companies controlled by the Islamic Revolutionary Guard Corps in the mid-1990s under the supervision of the then-minister of defense.

The site is part of a project managed by the main entity in charge of research and development of nuclear weapons, the Organization of Defensive Innovation and Research, known by its Persian acronym SPND.

This site was constructed for a project dubbed Marivan for the use of one of the SPND’s subdivisions, called the Center for Research and Expansion of Technologies on Explosions and Impact.

The center is engaged in the research and construction of nuclear high-explosive detonators.

Saeed Borji, one of the regime’s top explosives and high-impact specialists who for years worked directly under the supervision of Brig. Gen. Mohsen Fakhrizadeh, the key figure in Tehran’s nuclear weapons project, has been involved in the Marivan project.

Borji is currently in another role along with some of the most senior experts. It is alleged that he is still conducting research for the nuclear weapons program’s explosives and impact fields using a cover.