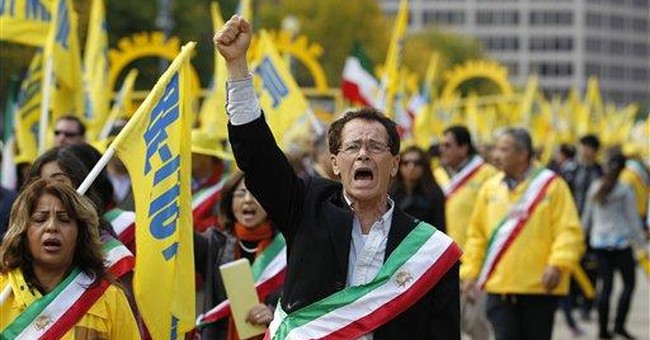 True to form, in the face of stubborn facts, Michael Rubin has again displayed a pattern of cognitive dissonance and ardent clinging to his erroneous opinions about the principal opposition movement in Iran, the Mujahedin-e Khalq (MEK), particularly at a time when the movement has made major political strides on the world stage.

Rubin argues, “It is time to retire any support for the Mujahedin-e Khalq,”  a pleading that he has vociferously made during the past two decades, as the MEK won court case after court case against the politically motivated terror tag aimed at appeasing the criminal Iranian regime, and as hundreds of reputable and respected US and European politicians, human rights defenders, intellectuals, and public figures flocked to the MEK’s side in bringing about fundamental change in Iran.

Rubin should know that the ever more forceful hurling of political epithets at the MEK does not make them true. “An error does not become truth by reason of multiplied propagation,” said Mahatma Gandhi aptly.

The religious dictatorship in Iran is paranoid about the MEK and publicly shows, in rhetoric and action, that it views the organization as an existential threat, to the extent that it continues to plot terrorist actions against it. Just this past month, when the MEK’s parent organization, the National Council of Resistance of Iran (NCRI), was planning to hold its annual Free Iran World Summit in Albania, the US government issued a security alert, about “a potential threat targeting the Free Iran World Summit to be held near Durres, Albania on July 23-24, 2022.”

On July 27, the mouthpiece of the Islamic Revolutionary Guard Corps (IRGC), Fars News, publicly called for missile and drone attacks on the MEK’s headquarters, Ashraf-3, in Albania. “Authorities in Tehran should issue the necessary warning to the Albanian government, which is hosting a few thousands MEK members, and follow it up with military action,” Fars News wrote. It also mentioned host governments, where the MEK has a presence, including France Germany and the United Kingdom.

Referring to the impact of the MEK inside Iran, the mullahs’ president, Ebrahim Raisi lamented on June 27, “Wherever you see evil and sedition in the country in the last 40 years, there has been a footprint of the hypocrites (regime’s pejorative term for the MEK). There has been no movement or action against this revolution where the hypocrites were absent.”

On June 25, in remarks published by the state-run Mehr news agency, the Intelligence Minister Esmail Khatib openly threatened the MEK with terrorism: “The disgraced Albanian-based terrorists have never been and will never be safe from the fire of revenge.”

A day earlier, Tehran’s deputy judiciary chief Kazem Gharibabadi made a startling admission “Perhaps at some junctures, the belief was that [MEK] has no support… and that there’s no need for us to refer to them any longer. But this is not our view anymore. In the (Iranian year) 1400 (beginning March 20, 2021) …. heavy pressure was brought to bear on countries that were hosting [MEK]. There has been no meeting between us and European ambassadors or delegations where we haven’t discussed [MEK].”

Curiously, as if in some philharmonic orchestra, Rubin sings a siren’s song of shunning the MEK, while Fars News Agency beats the drums of war with threats of missile and drone attacks on Ashraf-3, its home in Albania (a NATO member), and Tehran officials plead with the West to crack down on it through diplomatic channels.

Time and again it has been proven that Iran’s Ministry of Intelligence and Security (MOIS) hatches and propagates false information against the MEK and actively courts any pundit, journalist, politican, or crackpot that would undermine the MEK. It sometimes funds, and other times support such persons in their anti-MEK crusades.

On July 5, 2010, for example, the Canadian daily Toronto Sun quoted John Thompson, head of the Mackenzie Institute, a security minded think-tank, as saying that he was “offered $80,000 by a man tied to Iran’s mission in Canada. ‘They wanted me to publish a piece on the Mujahedin-e Khalq,’ he said.’ ‘Iran was trying to get other countries to label it as a terrorist cult.’”

The MEK is not only popular in Iran, it is rightfully celebrated as defender of democratic freedoms and ideals around the world based on shared values. Consider the impressive roster of just a fraction of the dignitaries and personalities showing extensive bipartisan support for the movement for decades.

This year, former US Vice President Mike Pence and former US Secretary of State Mike Pompeo visited the MEK and met with NCRI’s Maryam Rajavi, whose Ten-point Plan for the future of Iran, Mr. Pence said, “will ensure the freedom of expression, the freedom of assembly, freedom for every Iranian to choose their elected leaders. It’s a foundation on which to build the future of a free Iran.”

In July 2022, some 5,000 members of MEK-affiliated Resistance Units inside Iran sent video messages, reiterating their resolve to overthrow the theocratic regime. This showed that despite the risk of death, torture and imprisonment, significant numbers of Iranians inside the country are actively promoting the MEK’s democratic cause.

Nearly every credible chronology about the Iranian regime’s nuclear program cites the MEK as the first to expose the regime’s clandestine program. Senior U.S. officials at the time, including President George W. Bush, Vice President Dick Cheney, and Secretaries of State Condoleezza Rice and Colin Powell pointed to the role that the MEK had played in making the world aware of the regime’s secret nuclear weapons program for the first time.

According to The New York Times, “Frank Pabian, a senior adviser on nuclear non-proliferation at Los Alamos National Laboratory in New Mexico [said] ‘They’re [NCRI/MEK] right 90 percent of the time. That doesn’t mean they’re perfect, but 90 percent is a pretty good record.'”

Facts will not bend to Rubin’s small political angle. As the second U.S. President John Adams said, “Facts are stubborn things; and whatever may be our wishes, our inclinations, or the dictates of our passion, they cannot alter the state of facts and evidence.”