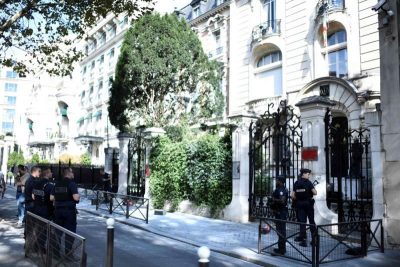 The National Council of Resistance of Iran welcomed France’s and Germany’s decisions and called on European countries to take stronger action against Tehran.

LONDON – The fallout from a foiled attack on an Iranian anti-government rally in Paris reverberated across Europe after France froze the assets of Iran’s intelligence services and Germany approved the extradition of an Iranian diplomat linked to the plot to Belgium, setting the stage for a potentially embarrassing trial.

“This extremely serious act that targeted our territory could not remain unanswered,” a statement by France’s economy, interior and foreign ministries said.

Paris specifically tied Iranian diplomat Assadollah Assadi and Deputy Minister and Director General of Intelligence Saeid Hashemi Moghadam to the foiled attack, which targeted a June 30 rally by the National Council of Resistance of Iran in Paris.

The moves coincided with a major French anti-terror raid on the Zahra Centre France in Dunkirk, a Shia Islamic centre with ties to Iran and Hezbollah. Although it was unclear whether the raid, in which three people were arrested and weapons seized, was part of the wider investigation, observers said it was clear Paris was getting tough on Tehran following the thwarted attack.

“We can consider that France took the foiled bombing plot seriously and has tried to put some pressure [on Iran]. It [France] wants to show a powerful image of itself and that it is ready to protect its soil against any kind of terrorist attack,” Iranian journalist Ershad Alijani told France 24.

The events raised controversy regarding Tehran, with observers calling for European governments to take stronger action against Iran at a time when the European Union is seeking to circumvent US sanctions and preserve the Iran nuclear deal.

“Tehran needs to know this outrageous behaviour will not be tolerated,” the White House National Security Council posted on Twitter.

“This absurd policy by the European institutions and a number of European government and leaders of trying to sell a completely wrong narrative to public opinion concerning Iran is the worst mistake that governments and leaders can make when confronting these kinds of episodes,” warned former Italian Foreign Minister Giulio Terzi at an October 4 meeting focusing on European failings in dealing with Iran of the International Committee in Search of Justice.

“We urge Germany, France and Belgium to expedite the prosecution of the mastermind and the perpetrators of the largest state-sponsored terrorism case and refer the matter to the UN Security Council,” said Ali Safavi, a member of the National Council of Resistance of Iran’s Foreign Affairs Committee.

“The EU must expel all Iranian intelligence agents working under the cover of diplomats, businessmen, analysts or journalists in Europe and recall its ambassadors from Tehran,” he added.

Prosecutors allege the plot involved Assadi, an Iranian diplomat based in Vienna, hiring a Belgian-Iranian couple to carry out a bomb attack on the National Council of Resistance of Iran rally, including providing them with an explosive device.

The couple was arrested in Belgium and the device confiscated on the day of the rally. Six people were detained in coordinated raids by European police. Two of those arrested were later released.